Alaska’s riverscapes belie the landscape’s age like creases on our skin. Where the rivers have been free flowing for a long time, they have incised deep gorges on their rush toward sea level. At higher elevations, where the water flowed downhill in glacial form until recently, the river valleys are more frequently U-shaped, as the rivers haven’t been downcutting long enough to carve deep gorges. Sometimes, great terminal moraines make these boundaries between older and younger rivers very clear. The earth and rock, not colonized yet even by lichen, may make the earth seem very young. 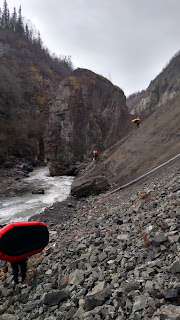 Even this glacial dynamism doesn’t compare to the wildly unstable incision that Caribou Creek cuts through the Talkeetna Mountains. Caribou’s earthen walls slough off, periodically flowing in a viscous ooze to dam the river below. Its rock walls fracture and plummet into the rapids below. Its ever-flowing waters cut through and beneath the soft bedrock, sidewalls, and pinnacles that line the river. Few places on earth seem as raw, unstable, and youthful as Caribou’s canyons.


Caribou Creek forms in the southeast corner of the Talkeetna highlands. Steep headwaters give way to more placid waters around Syncline Mountain and Squaw Creek. Then Caribou slices downward through the soft rock on its frenetic course toward the Matanuska. This series of canyons is great packrafting destination to watch the earth changing before your eyes.


There are two common ways to access Caribou Creek. The longer route follows an ATV route west, paralleling Squaw Creek to its confluence with Caribou. There is a parking area off a spur road on the north side of the Glenn Highway, near the eastern end of Syncline Mountain. Count on this route being wet and muddy. A shorter access route begins at the parking area where the Glenn Highway crosses Caribou Creek. From the large gravel lot on the north side of the road, look for an ATV trail that climbs steeply up the hillside. This trail switchbacks up to a plateau, which it follows northeast for several miles. The trail is thick with blueberries when they’re in season, and has frequent views of Fortress Mountain to the northwest and other Talkeetna peaks. This ATV route terminates at a bluff above the river, near a placer mining site, and has a moderately steep descent down to the river. It would be possible but much slower to continue upriver, staying on benches above the canyon, but if you want to put in higher it would be preferable to go in via Squaw Creek. Accessing Caribou from the Glenn Highway bridge does have the disadvantage of missing some of creek’s rapids, but is convenient in that it avoids the need for a shuttle.


There is a large waterfall on Caribou Creek that packrafters will not want to run. It is right next to a prominent tower that looms over the water on river right, and follows a fairly long Class III+ rapid. Since the portage is on the right side of the river, and since the Class III+ rapid has mostly bedrock on the right with tiny eddies, it is wise to take out and begin portaging above that rapid. You may know that you’re getting close to the waterfall because the river goes through several tighter bedrock slots, in which the current is much more restricted than the mellower, spread-out rapids upstream. The portage is not long or difficult, though it has a short, somewhat slippery pitch up to the saddle that separates the riverside pinnacle from the canyon walls. The base of the waterfall is an easy put in, with a nice gravel bar for taking photos.


From this bar, a fairly recent landslide is visible a couple hundred yards downstream. Incredibly, the land appears to have sloughed off the side of the canyon and flowed down into the river. This landslide produces a constriction, though as of early October 2016 the rapid is still an easy Class II+. The river’s unstable character continues: Shortly downstream, a rockfall produces a more technical rapid that has an undercut rock in the middle. The main flow slams into this rock as it pours over a ledge. At low water, drive hard left to stay off the undercut portion of the rock. At higher water levels, this rapid would be easier with a clean right hand passage. There is also an easy portage over boulders on the right.


Below this drop, the rapids transition to easy Class I riffles and chutes, as the river continues to pass between high canyon walls. In several places, waterfalls tumble into the river over bedrock. Unfortunately, a mining operation has laid waste to a significant portion of the river, as the operator has driven a large bulldozer up and down the bed of the river itself to access the mine site. If you have time, it is possible to continue past the Glenn Highway bridge and run Lion’s Head, which is an enjoyable but non-threatening Class III at typical low volume autumn levels.


Caribou is a relaxing fall float trip, as lower water levels reduce the power of the river’s constriction to manageable Class II and perhaps III rapids. I can’t think of another trip that combines such remarkable canyon scenery with generally safe, forgiving rapids. Of course, the river would have a completely different and much more consequential character after a rain. If you’re looking for Type 1 paddling fun in Alaska’s lengthening paddling season, Caribou Creek is a great destination to witness the raw power of geologic dynamism. The land and rock slides and bare canyon walls unfurl before you, revealing a young and changing earth.
Labels: Packraft 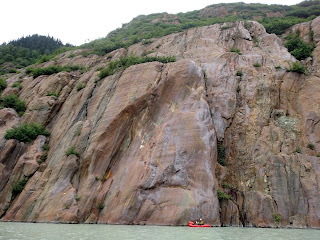